Following another week that has brought us closer to global annihilation, revealed skeletons in the closets of the world’s best dressers and seen humanity go another seven days without any sign of the meek being granted an inheritance tax exemption, The Daily Belter takes a look back at the big stories that have captivated, concerned and constipated our compelled collective, cool?

Monday was dominated by talk of Hillary Clinton, as the presidential candidate faced a storm of controversy after being footage emerged of her insensitively impersonating the collapsing World Trade Centre during the previous day’s anniversary of 9/11. Mrs Clinton’s staff denied the claim, saying that she had accidentally taken a bottle of water Bill had roofied, but the Democrat’s campaign is still in trouble after she was later seen infecting a little girl with pneumonia on purpose.

The outburst raised a significant amount of conversation about her physical condition, and there are still lingering doubts about whether the only case of bubonic plague in the United States should be allowed to be president, particularly when said patient also has rickets, cholera and herpes, which she caught when she accidentally used Bill’s toothbrush. In response, rival Donald Trump has pledged to publicise his medical records, despite this revealing his wild boar DNA.

On Tuesday, North Korea caused ripples on the global stage after testing one of their nuclear missiles, firing it into the eye of the moon in an apparent homage to the Georges Melies film A Trip to the Moon. A spokesman for Kim Jong-un’s divinely appointed government said that the test was to “ensure our glorious nation is protected from barbarian enemies, who we can melt” before stating that the moon was chosen as a target after it defected to South Korea.

Meanwhile in Europe, another outrage was caused in Catalonia as Barcelona were accused by the international council on human rights of genocide after they beat Celtic 7-0 in a Champions League group game. Lionel Messi, currently wearing peroxide hair in seeming tribute to Milo Yiannopoulos, was seen to laugh maniacally as he scored a hattrick in a game that since become illegal to view after being reclassified as a snuff film.

Wednesday featured a more light hearted development as the crew of a Russian Arctic base were besieged by ten adorable polar bears, who amusingly devoured the team’s dog and maintained a fierce encirclement on Troynoy Island that trapped the five scientists for twelve days, as Russian law prohibits the killing of animals “more mighty than a mere peasant”, which some pundits have derided as “white bear privilege”. The bears were reportedly protesting against global warming.

In Parliament, Prime Minister Theresa May was the subject to questions as part of Prime Minister’s Questions, in which the Prime Minister, in this case Mrs May, is asked questions that are directly at the Prime Minister, currently Mrs May. Labour leader Jeremy Corbyn grilled Mrs May on the controversial decision to open new Grammar schools, as he noted that they cause unfair disparity for stupid children, but was dismissed by Mrs May as a hypocrite from the 1950s.

Statistics published on Thursday showed that occurrences of air rage had almost quadrupled in a year, apparently due to climate change creating a carbonised ‘layer of violence’ at high altitude, causing staggering holidaymakers to threaten “cannister banging” if they badmouthed Paul Gascoigne or refused to laugh at his joke. A spokesman for RyanAir suggested that the figures were influenced by offences such as ‘farting noxiously’, ‘spreading legs’ and ‘enjoying Roy Chubby Brown’ being classified as rage. 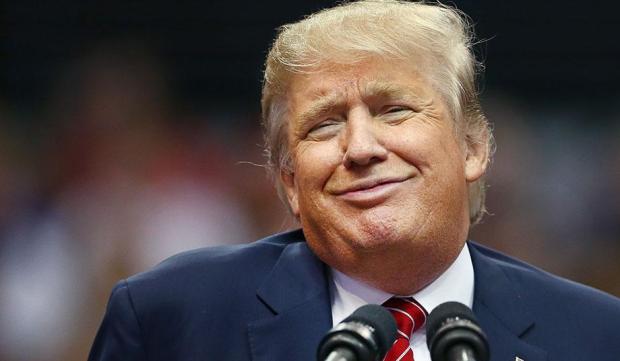 Donald Trump risked the wrath of hateful anti-hate activists for sending a reef to the Clinton home.

In the evening, viewers were distressed to watch as the romantic break up between Alistair Campbell and John McDonnell continued to deteriorate into acrimonious bickering as the two locked horns on BBC’s Question Time, with Quentin Letts’ attempts to distract the former couple by being a ballistic tool failing to fly. Campbell and McDonnell split when it was discovered that the latter was having an affair with Jeremy Corbyn, though Mr McDonnell has denied being a Marxist.

Friday saw Diane James become the new leader of UKIP after successfully completing a ceremony in which she eat the entirety of a raw horse heart in front of a chanting and intoning horde of peers, though she had less luck in accepting a hug and kiss from Anuran predecessor Nigel Farage, who was later seen acquiring a prostitute to admonish. James, who admits that Vladimir Putin is one of her political heroes and has a yeast intolerance of foreigners, celebrated by hand baking a child.

Former Chancellor of the Exchequer George Osborne set up a think tank to help him establish Northern Powerhouse, an effort to fulfil his long standing ambition to create an economy that would rival the capital before eventually eclipsing it, whereby he would purchase sellswords with which to annex the Southron lands as the first major step in actualising his own Kingdom, which he’d rule from his Onyx bone throne in the new Supercity, Osbornemouth.

Further hostilities in the US presidential race came forth on Saturday when Donald Trump suggested that Hillary Clinton’s security teams disarm, on the grounds that “if she hates guns so much she shouldn’t have them to protect herself from them”, which was widely interpreted as being a death threat despite Mrs Clinton’s body seeming doing the job for him. Trump denied that this was his intent, and said: “My intentions are terrific, they’re the greatest intentions the galaxy has ever seen.”

There was controversy in the United Kingdom as well, as defence minister Michael Farron was sent a worrying ten page manifesto by retired General Sir Richard Barrons, stating that the country would be unable to defend itself from Russia were they to inexplicably invade. Sir Richard, who has been described as a “highly dignified ambassador” and a “moany old twat” by different sources, reportedly cited the lack of weaponised elephants and Diane James’ victory as chief concerns.

Military gaffes continued on Sunday, as the US Air Force accidentally bombed Syrian military units in Deir El-Zour, reportedly killing sixty soldiers in the process and continuing the honourable American tradition of being so committed to the cause that they try to start new ones. Sources within the US Military have admitted that they “possibly, I mean, maybe” were responsible for the mistake, and said “it’s hard because we were trying to kill IS, but all those guys look the same.”

The day also marked the second anniversary of the Scottish Independence Referendum, and a series of events were held including singing, walking and drinking heavily. Though the celebration, which experts have suggested could be the next National AIDS Day, was mostly conducted by ‘Yes’ voters, Professor Adam Tomkins hosted a ‘No Victory’ banquet at the Crieff Hydro in which he gave a speech stating “YOU CAN’T HAVE IT, ALEC!” nineteen times.

That was the past week in news, though in the interest of sensationalism we’ve left the best for last, namely the discovery of a spore in Honduras that can enter the brain through the nasal canal and is superior to the human species in every way, and will serve as a much better administrator to our meaty bodies than an uncoupled cranium ever could. The spore is life, and the spore is meaning; the spore is the answer, the spore that is eating my brain. Submit to marry the spore. Submit. Submit to the spore. Help me.