Prime Minister Theresa May and her cabinet met at her country house in Chequers today to discuss the United Kingdom’s exit from the EU, but reports from inside the house suggest they played checkers, shared Camber Sands jokes and crank called Sue Perkins into withdrawing from the Great British Bake Off instead of doing their work.

Mrs May has previously stated that she wouldn’t “rush” the process and has refused to disclose when she will invoke Article 66, but has attracted criticism for routinely changing the subject when asked about it and even told Andrew Neil that she had a headache as a way to evade questioning and his unwanted sexual advances during an interview last week.

And the claims made about today’s summit would suggest that the Prime Minister and government as a whole are still dragging their heels, a problematic tact given that the UK has to import their heels from Belgium and the Netherlands due to a lack of heel mills.

A senior aide present at the meeting, in which a strategy for implementing Brexit was supposed to be formed, said that the matter was broached for the first five minutes until party chairman Patrick McLoughlin insisted on finishing his game of Farmville, delaying talks.

Justine Greening, Education Secretary and Minister for Women and Equalities, then took that as an opportunity to play Candy Crush Saga, which overlapped with Mr McLoughlin completing his game and prompted him to begin eating a bag of Revels, in turn inspiring Foreign Secretary Boris Johnson to order fried ostrich over JustEat. 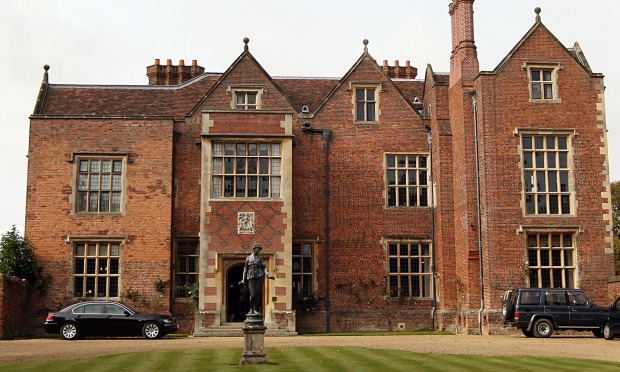 Winston Churchill ordered the renovation of Chequers in 1953, in celebration of “a successful gassing of brown people”.

After being challenged by Boris Johnson, who complained that checkers was “the ruh ruh ruh, game of the sweaty Mesopotamian devil, the black man’s black man”, Mrs May vowed to prove its superiority as she began a game with her foreign secretary, who quickly became flustered at what he described as “she-guerilla tactics, crubba ba”.

While Mrs May and Mr Johnson continued to play, the other ministers watched on and shared racist jokes, as well as trying to contrive the funniest idea for a film retro-fitted to star Jeremy Corbyn, a game won by David Davis for ‘It’s a Corbynful Life’, in which the Labour leader is shown visions of a joyous and prosperous Britain and thus goes ahead with his suicide.

Liam Fox and Damian Green repeatedly called Sue Perkins, impersonating various voices in order to convince her that her aunt had died following a knife fight with Mohammed Al Fayed in Coventry’s Harrods, while Andrea Leadsom phoned a number of random women to tell them their children had been killed by a drunk driver, in order to gauge their upset and thus motherhood skills.

The result was the wastage of eight hours, with the country still no closer to leaving the EU and the sudden realisation that holding discussions in a huge old house in the country rather than a huge old office in the city makes little difference when you have the mind of a 19th century ivory dealer who likes to fuck the elephants while he’s about it.