Celtic will face further charges and sanctions from UEFA in the event that Irish flags displayed at Parkhead are seen by any English or Northern Irish people, with the governing body threatening to expel the club from European competitions and publicly declare that Henrik Larsson is shit.

The club have a record of drawing reprisal from UEFA, and have already been charged with breaching Article 16 (2e) of the body’s governing regulations after their fans unveiled Palestinian flags during Thursday night’s game against Hapoel Beer-Sheva, on the grounds that it was a political statement that threatened the feelings of observant Israelis.

And UEFA now intend to further punish the club if the tricolour is seen by any who would find it political, ideological or offensive under the terms of the same edict, which outlaws ‘the use of gestures, words, objects or any other means to transmit any message that is not fit for a sports event, particularly messages that are of a political, ideological, religious, offensive or provocative nature’.

A spokesperson for UEFA told the press: “Celtic Football Club have breached our regulations once more, and this has drawn our attention to them likely breaching them yet again, so we are putting our foot down. Nobody is above the law. Except us. And FIFA. But not them. Celtic, I mean.

“Clearly their fans showing the Palestinian flag was intended to grossly offend the Israeli players and fans by reminding them of Palestine, and we would be remiss if we didn’t recognise that the Irish flag can have the same effect on the English people and the Northern Irish for similar reasons, so we have moved for consistency. 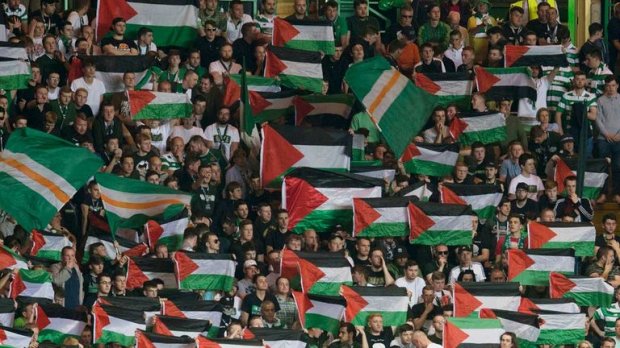 Proceedings against Celtic could lead the way to charges against Rangers FC for displaying Joey Barton at Ibrox.

“Our ruling on this is absolutely final, and Celtic will be hit harder than they were by Tony Mowbray if they disobey it. We also want to make clear that any clubs who display German flags in games watched by Israelis will be similarly punished, as will any who show German flags to the Dutch, or Serb flags to Bosnians, or Union flags to Scottish ‘yes’ voters, or a whale to some flotsam.”

A breach of this ruling could lead to a partial stadium closure, fines and a public admonishment of chairman Ian Bankier by way of aubergine mulch, which will put pressure of the club to ban potentially harmful flags ahead of games in the SPL and Europa League, which the club will compete in when they lose 0-5 away to Hapoel in a display that shows plenty of character.

Further sanctions could include a blockade of the River Clyde by Venetian yachts under the command of a pardon-seeking Franz Beckenbauer, the immediate retroactive retraction of the club’s European Cup victory in 1967, and an official announcement stating that Henrik Larsson was “shit”, “half the player Marco Negri was” and “better before he broke his leg”.

Celtic have refused to comment either on the threat regarding use of the tricolour or the charges over the Palestinian flag, while Brendan Rodgers wasn’t drawn on the issue when asked during a press conference yesterday, simply saying: “It’s perfectly acceptable for them to do that, apart from them charging us, but I don’t know, the club will take care of it.”

But the more direct approach from UEFA could lead to significant precedent in charging clubs with ambiguous fan behaviour that is open to interpretation, which has led many concerned football fans to wonder whether it’s possible that the sport’s authorities aren’t entirely paragons of virtue.