A senior insider at Buckingham Palace has confirmed claims by social media users that 3 year old Prince George is a “fucking dickhead”, and added that the child exhibits behaviour that is far worse and borders on “unbearably arseholic”.

There was controversy earlier this week when Angela Gibbins, a senior manager and charity worker for the British Council, wrote a searing criticism of George in the comments for a picture of the young royal with the caption “I know he’s only two years old, but Prince George already looks like a fucking dickhead”.

Although she was implied to have been responsible for this remark by The Sun, a surprising piece of misdirection and dishonest journalism from such a respectable chip shop paper producer, Gibbens actually stated that George’s “cheeky grin” demonstrated the “innate knowledge” of his “white privilege”.

But despite being widely lambasted for her comment, which also said that Syrians look different, Gibbins’ case has been supported by an anonymous palace aide ahead of an investigation by the British Council.

The informant, who we cannot identify but has a distinct aroma like chicken cup a’ soup mixed with pine air fresheners, told The Daily Belter that George “really, really did look like a fucking dickhead in that photo shoot, more so than usual” before adding that “based on his personality and the things he’s said, he’s really more of a cunthead.”

They identified many behaviours and incidents involving the young Prince that include feeding chocolate ice cream to a Corgi, posting misogynistic comments about the Ghostbusters remake trailer on YouTube and making numerous racial comments to visiting foreign dignitaries.

According to the insider, when the prince met Barack Obama, George tutted and sighed before commenting under his breath that it was “political madness gone mad”, then asked how fast the US President could run.

The source suggested that George had perhaps been spending “too much time with his great grandfather”, but also indicated that there were grounds to believe that the Prince was “already evil” after he was born to the Duchess of Cambridge “fist first”. 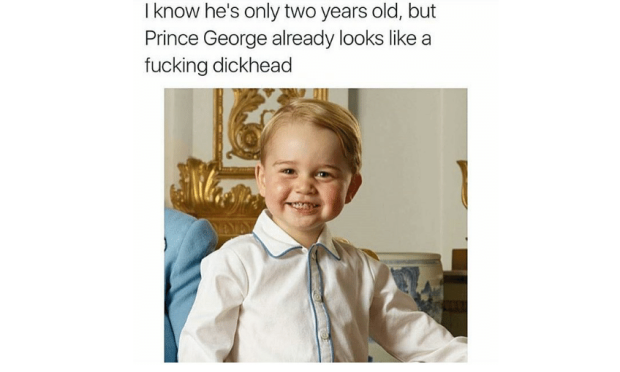 The source said the comments were appropriate, and that George “frequently cracks Princess Die jokes”.

They said: “Even from the first few seconds you could tell he was a little prick; it was the way he looked at everything, not with inquisitiveness like a normal child but with contempt and a little cruel amusement. He always stares at paraplegics and there’s this little shadow of a grin. His behaviour is usually bordering on the unbearably arseholic.

“I don’t really like the way Angela Gibbins made her point, and she does come across as a bit of a dickhead herself, but she doesn’t exactly have no reason, and neither does the person who made the original comment. As somebody who spends a lot of time with George in private, I can say that people aren’t going far enough. He’s basically the next Marquis de Sade but without the intellect.”

When asked whether this implied a below average level of intelligence, the source confirmed that this was their meaning, claiming that the Prince “frequently has conversations with mirrors”, that he “watches Pewdiepie videos relentlessly” and that he wanted to visit the “large hard on collider.”

Meanwhile, George himself has publicly responded to the attack made against him by Gibbins, who is the head of global estates for the charity wing of the Council, by posting on his official Twitter account: “That ugly serf face is the inate knowldge shes (sic) pointless, poor, disadvantaged and will never know any power or mercy in short life left #NeedANewPlague”.

The British Council will conduct an investigation of Gibbins, who they initially said wasn’t representing the organisation with her comments, but she has been handed a boost after a leading barrister said that her “offensive” remarks clearly qualified as “fair comment”.

Anthony Marquand QC told the Belter that since this defence is built on “ensuring that a stated inference is clearly drawn from established facts” and that Prince George “quite clearly does look like a fucking dickhead” in the photo, it would serve Gibbins well if the matter went to court.

He said: “It’s unlikely that there will be a criminal action against her, but were the British Council to terminate her they would have to demonstrate that her remarks breached their contract, and it seems to me that if you call a turd a turd, you’ve broken nothing but silence.”

It is understood that Gibbins has been offered a column writing for The Observer, and will be hired as a guest speaker and pundit for ITV’s This Morning.