VisitBritain, the British Tourist Authority, has announced plans to reanimate the corpse of Diana Spencer, former Diana Princess of Wales, as a cyborg in a bid to rejuvenate their faltering revenue, which fell for the third straight year in 2015 after television rights to Royal functions were acquired by Netflix.

Revenue streams within the British tourism industry have also continued to drop over the last ten years, while it has also been claimed by commercial analysts that the popularity of the Royal Family has dwindled due to the success of the Home Box Office programme Game of Thrones.

Rupert Trussoch-Snodcraft, the Chief Executive of VisitBritain, had previously refused to comment on claims that Ms Spencer’s body was being genetically altered in conjunction with a shared-operation with the Metropolitan Police Service in the aftermath of the 2011 London riots. 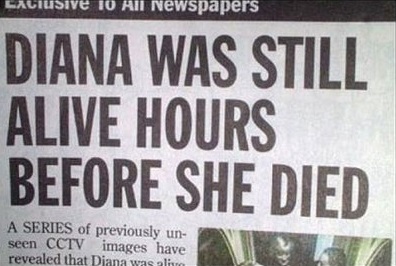 “That was then, this is now,” Trussoch-Snodcraft stated at a press conference this afternoon. “I can’t deny that there were talks. But talks of what? The future? Can you tell the future? I can’t. No, this is purely for the tourist trade. People love Diana, TV ratings for her funeral show that. And landmine sales went through the roof when she died.”

Trussoch-Snodcraft, who previously served on the board of directors of technological firm OCP and as a financial adviser to Francois Duvalier, refused to be drawn on rumours that his team had been forced to remove Ms Spencer’s memories to avoid the prospect of retribution.

“No need,” he said, “no need, not one iota of need, not one… not one… no. Even if she could remember, it’s not like she could do anything about it. She doesn’t even know she used to be human, or what she is now. Haven’t you seen The Walking Dead? What could possibly go wrong? Nothing. Nothing…”